If you’ve ever picked up a can of Bomber Mountain Amber Ale from Black Tooth Brewing in Wyoming, you’ll notice a WWII, B-17 Bomber on the side.

On a sunny Sunday in August of 1945, Wyoming cowboys Berl Bader and Albert Kirkpatrick noticed something shiny up ahead of them on a high ridge in the Bighorn Mountains. Climbing up the unnamed mountain ridge to investigate, the two discovered what appeared to be

the scattered wreckage of a plane along with several bodies.

In June of 1943, a B-17 Flying Fortress, nicknamed “Scharazad”, with a crew of ten, departed Pendleton Army Air Base in Oregon destined for Grand Island, Nebraska. From there, the bomber would join other members and continue to England to participate in the ongoing bombing campaign against Nazi Germany.

Around midnight, the captain radioed in that their position was near Powder River, Wyoming. That would be their last radio call. After they failed to arrive in Grand Island, the plane was declared missing and the Army mounted a search effort with no results. A second search was conducted the following year, concentrating on the Wind River Mountains, Absaroka Mountains and Big Horn Mountains, but still no wreckage was spotted until the Bader and Kirkpatrick discovery, two years later. The paint on the plane that matched the mountain side had faded, revealing shiny patches in the metal, making it easier to spot in the bright sun.

Although the plane reported its last position 40 miles northwest of Casper, the wreckage was found 110 miles north of Casper, indicating that the plane was either off-course or its navigational instruments were malfunctioning. This factor alone was significant in the delay of finding the missing plane. Weather may have also been a factor in the crash. No moon was visible on the evening of June 28th, 1945, so it is likely that the Pilot would not have noticed the approaching unnamed mountain peak rising before him until it was too late.

Secondly, area residents reported a freak snowstorm on that evening which may have played a factor as well. Army reports indicate that the crew was young and likely inexperienced, and the plane was flying too low. When the pilot noticed the looming peak, the engines were put to full throttle. While he pulled up the plane’s nose at the last minute, the tail section could not clear the mountain and the plane ripped in half, explaining the disbursement of wreckage on both the east and west sides of the mountain. It appears that the plane needed just 50 to 100 feet more to have cleared the mountain ridge. 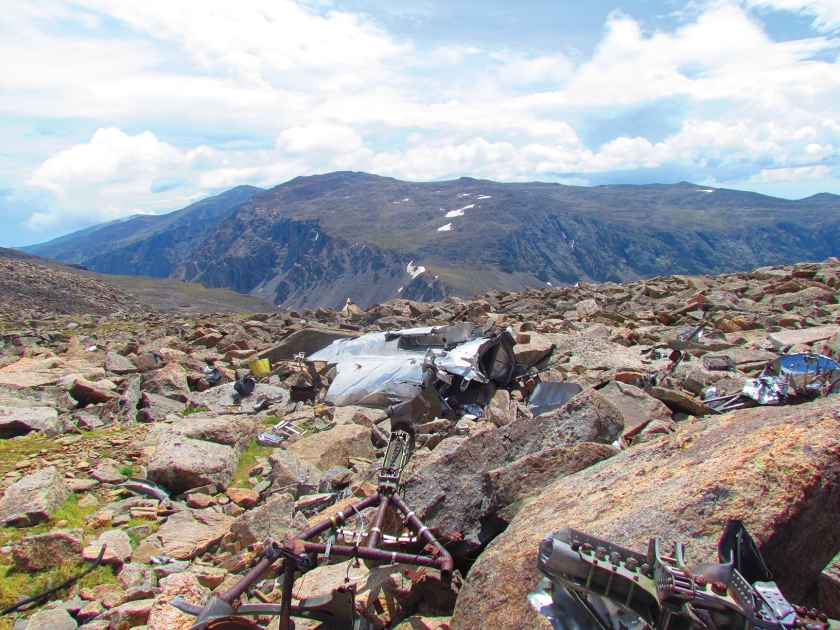 The exact site of the crash, a precipice of more than 12,000-feet in the Cloud Peak Wilderness, was named by the Sheridan Chapter of American War Dads. And has been known ever since as Bomber Mountain. The crew is now forever memorialized in the Bighorn Mountains.