I started yesterday in Livingston, Montana. Livingston is located at the head of the Paradise Valley, sandwiched in between the majestic Crazy Mountains and the formidable Absaroka Range, where the plains meet the mountains. It is home to a burgeoning craft beer scene, and over a dozen art galleries.

Their symbol being Neptune, the Roman god of the sea. The place was laid out in what you would expect to see down south in a more tropical climate, not in a Montana frontier town.

When you walk into Neptune, the first thing you notice is an aquarium behind the bar with tropical fish, that serves as a two way window into the brewing room. Very cool. The rest of the place is more or less Neptunish related things, including pictures of what looked to be the owners or previous owners, dressed in navy duds and fishing photos. There’s a sushi bar with a busy chef in the corner as well. I loved the vibe of this place. It was warm and well laid out, Motown playing on the stereo and a friendly sociable staff and regulars to boot.

I ordered the philly roll – (cream cheese, avocado, cucumber, smoked salmon & green onions) along with their Wee Heavy Scottish Ale 8.6% (a good kick in the kilt) a Winterfest 7.1% and the Knotty Lotte Latte Stout 6.5%. with coffee beans from Yellowstone Coffee Roasters. All were excellent.

My drinking partners included a female dog sledder and a hard lined local named Bill, that filled me in on everything from the town history to Margot Kidders escapades (Kidder lives in town) and his disgust for “Bozeangeles” which is a derogatory term that Montanians give Bozeman based on the fact that it’s become an overpopulated hotbed of commercialism and rich outsiders. I got the vibe, that Livingston is still very much it’s own town. I also made a friend, a former employee at Neptune. He walked with me to Katabatic Brewery which was my next stop. 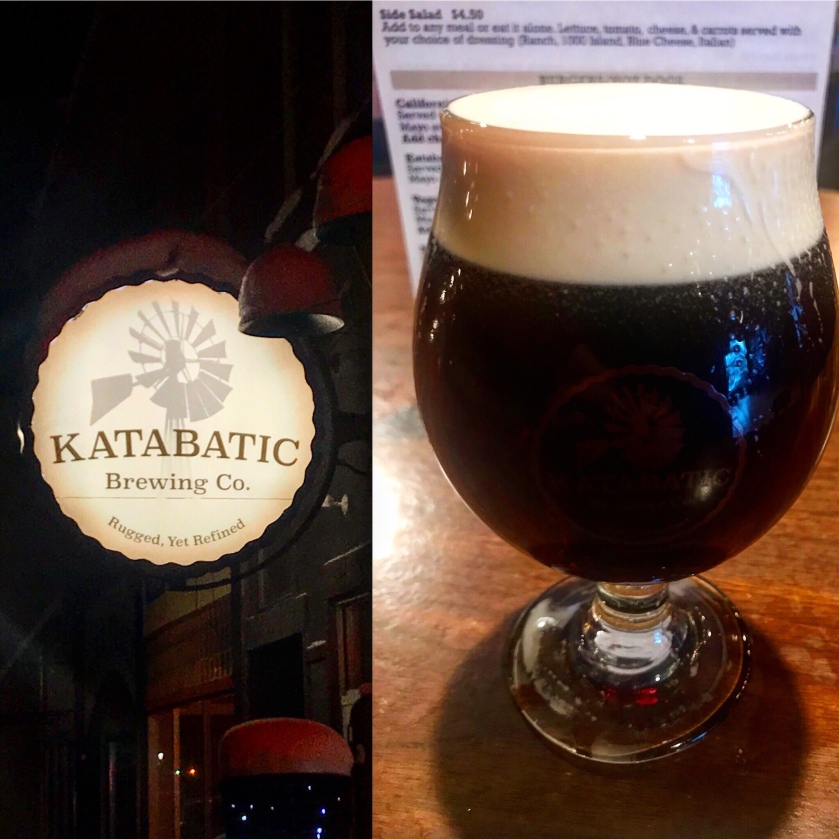 Katabatic’s tagline, “Rugged, Yet Refined,” captures the rugged mountains that surround Livingston and the refined quality of their beer. Katabatic is a term for wind or air current, moving downward or down a slope. What you might call a windy day, is just a breezy day for folks in town. On an average day the winds are blowing about 16 mph, but the highest wind ever recorded was back in 1978 at 108 mph.

After sampling a couple of beers I settled on the Katabatic Strong Scotch Ale 7.3. A deep, dark, malty Beer, with six different malts in it. This is a BOLD full-bodied beer, the finish is sweet, but not cloying and I loved the 13-ounce Belgian Snifter Glass they serve it in.

My new friend “Apollo” has spent his whole life in Livingston, and again, like Bill, gave me a pretty down to earth layout of the local political scene, gossip, and his view of things. I feel like I was given my initiation pass.

I should mention, Montana law limits you to three beers at one sitting. In a way this is good, because it keeps the breweries hopping, as people move on to the next one after their limit is reached.

This is a text widget. The Text Widget allows you to add text or HTML to your sidebar. You can use a text widget to display text, links, images, HTML, or a combination of these. Edit them in the Widget section of the Customizer.
%d bloggers like this: